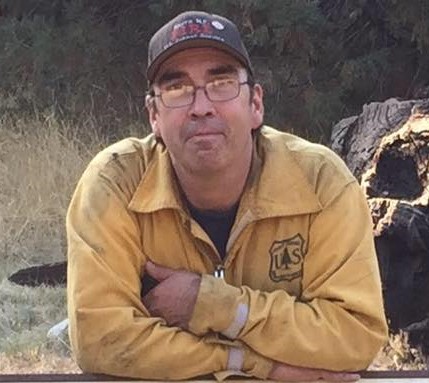 What advice would you give to someone who is interested in a career in fire?

If they really want to get into fire, no matter what it is, aviation, hotshots, engines, what it comes down to is that we’re all on the ground fighting fire, but we’re all doing different things. But the most important thing is that you need to get yourself known. Start visiting stations, start making time to talk to the people who are doing it. You need to start making time to meet people. And you need to be able to explain to people “What makes you want to be a firefighter?” For the most part, it’s a pretty crazy career choice, But if they really want it bad enough, they really need to go out and get themselves known.

If I see a name I recognize, because they kept coming to me, asking questions, visiting the station, calling me on the phone, i know they have the desire, and they want to do it. And those are the first people I look at. People that get out there, that are ambitious. Those are the kinds of people that I recommend to others, when I don’t have any room on my crew. I say, “this guy or gal, they’ve been coming to me, they want a job, let’s give them a chance.”

And once they get in, show that they want to be there. That it is not just a job. They want to go above and beyond. That they want to get dirty.  They want to be self-motivating. They want to impress. Those are the things that I look for. I’ve had the good and bad with employees. You push the ones who you know are going to go far, and the other ones, you try and be patient with, but if they don’t have the motivation, you have to sit them down and say maybe this isn’t for you. Most of the time, they’ll agree with you. You have to be honest with them. Either they can change their ways, or they go can go somewhere else. I’ve had both types of people.

What motivated you to pursue a career in fire?

I started my career in 1987. I was in college, pursuing a degree in forestry.  Fire was not on my list of things to do. I had no desire to do it, I wanted to get into engineering, particularly surveying. So I started my career with the Forest Service. Back then, everyone fought fire. Surveyors, clerks, everyone went out when there was a fire. So I got into fire by accident. One of my old college professors told me, “The smoke gets in your blood, and it never goes away. It never gets out of your system.” Once I got that first taste. I  decided this is for me, and the next year I got on an engine crew.

Growing up, I was a boy scout, and I spent a lot of time outside,  a lot of time camping on the Sierra National Forest.. And even though I lived in the central valley, in the flatlands,, I grew up in the mountains. So it was natural for me to transition as an adult after high school to go into forestry..

What tips would you share for physically preparing for the fire season?

I’m a hiker. I was never much of a runner. I never pushed them away from running. But I was always hiking. We hiked like we worked. Full gear. Saws. Sometimes with hose packs. We always had a couple good spots where we hiked. Mostly competitive, and we’d see who got up the fastest. I always pushed them. Don’t stop. If you’re slow that’s fine. But don’t stop.

I listened to a division chief talk to his hotshots. He said “You guys are athletes. You’re professional athletes. In fact you’re probably in better shape than most professional athletes. You have to take care of yourselves. You have to train every day. Eat right. Get good sleep. Stay off the booze.” If you talk to hotshot supts, you know their hikes are hell. They train, and they train, and they train. You’ve hiked with them, you know how it is. You’ll hike their hill, get to the top, and they’ll turn right around say, “Alright, let’s do it again.”

During the off-season, you need to motivate yourself. Exercising sucks. It hurts. But you gotta do it. You need to get a rhythm so if you miss a day you feel guilty.

What are you thinking about when you’re on your way to a fire?

We get a fire call. I hear where it’s at. As we’re driving, I start running scenarios in my head. It’s pretty common for module leaders to start “What-if” scenarios in your head while you’re en route. You’re hearing information. Maybe from a lookout. “The fire is burning upslope. The smoke is rising. Its brown in color. It’s rising fast.” It gives you an idea of what to expect when you get there. You know you’re going to be the first one on scene, you know you’re going to be the incident commander, so you’re thinking “What sorts of resources do I think I need?”I pre-attack it. I learned it early on in my career from a Battalion Chief.

When I get on-scene,  I’ll give it a size-up. I’ll brief my crew. We don’t get out the door till I brief them. I brief them on, “Here’s what I want. Here’s what I expect. Here are the escape routes and safety zones. Maybe we have power lines, or we have a lot of people or traffic in the area. Here’s how we’re gonna deal with that. Then I’ll tell them what tool line-up I want, depending on the fuel type and how I want them to run the hose lay. Once we get all that in place, their training kicks in, my training kicks in, we get out the door, and we start doing our job. I’ll get out ahead of my crew and start scouting the line. As the IC, I’ll be making determinations. Do I need more aircraft, or do I need to cancel? I’m thinking about all the other resources too, do I need more or do I need to cancel them? I’m constantly talking with dispatch and with air attack over us and with adjoining crews as they come on. We form a plan, and do what we can to put the fire out. That’s basically how I run an initial attack. Those are the things that I’m doing and thinking about.

What are some of your strongest memories from fire?

I have been to some of the most beautiful places. Places most people in this world will never see. I don’t know how many times I’ve been to Yosemite. I’ve seen more parts of Yosemite than most will ever see. Fighting fire in Yosemite is awesome. I’ve been all over California too. I spent some time in the Grand Canyon. Those are the good parts of the job. Our playground is the world. We can go anywhere in the world and fight fire. Or do other things. I got to assist with the Shuttle Recovery Program. That’s an experience not too many people can experience.

But there’s been some sad things too. Years and years ago, a gentleman by the name of Mike Smith, who was a lead plane pilot,  he was killed in a plane crash, and it just floored me. It was so personal. It was someone I knew personally, it was the first time that someone I knew, that I fought fire with, died in the line of duty. That was a long time ago. But I still remember the exact moment when I was told what had happened.

The first large fire of my career, back in 1988, the Havela Fire on the Sequoia National forest, I remember  a lead plane crashed and a dozer flipped over. All on one shift. On the first shift of my first large fire. At that point, I thought, wow, this is real. People get hurt.Those are extraordinary events in my career that I’ll never forget.

<Note: This interview was conducted in August 2016. It has been edited for length and clarity>