“Go to a bar and wait for winter!” is the type of response you might get from a salty veteran of fire. Hopefully, after this section, you’ll never have to embarrass yourself in public by asking such a basic question. If you get to your first day on the job as a firefighter, and you still have to ask this, then I have failed you. But seriously, how do you it? After all, there are no fire hydrants in the woods, right?

Wildland firefighting is premised on the idea of containment. Trap the fire in a box, and let it burn itself out. Now, it is the job of the wildland firefighter (soon to be you!) to help build that box. Let’s use a very simple example to illustrate how you might do this. Of course, I’m going to overly simplify this. So understand that this is just supposed to illustrate the general concepts and shouldn’t be taken as a literal guide for “How to fight a wildland fire”. I’m going to ignore things like lookouts, safety zones, backfires, indirect vs. direct vs. parallel line construction, etc. We can discuss those things later.

So let us assume we have a small fire on a hill. Maybe a few careless campers had a campfire going and it escaped. So it started at the bottom of a little hill, and it is working its way up the hill in a “V” shape. When you and your crew arrive, it is currently about ¼ of the way up the hill. You’re on a twenty-person crew, and you just hiked in. The hillside is covered mostly in dry grass, so the flame lengths are small (less than a foot) which will allow you to work closely to the fire. Your Superintendent decides that it is safe enough to “Go Direct”, and construct fireline with “One foot in the black.”

Step 1: Find an Anchor Point. You need to start somewhere, right? Oftentimes, the anchor point will be the fire’s origin, or a rock, a lake, a road, anything that is not flammable. Once the anchor point has been established, the work can begin.

Step 2: Start Flanking It. Ideally, you have two units working simultaneously to flank the fire from both sides. Twenty person hand crews will routinely divide into two units (or ‘squads’, or ‘mods’, I’ve heard them called all three). One squad will take the right flank, and the other squad will take the left flank. Starting at the anchor point, they will begin to construct fireline. Fireline is also called ‘containment line’ or ‘hand line’ too. All three terms mean more or less the same thing. But whatever you call it, the purpose of the line is to create a gap between the fire and stuff that can burn. If it is a handcrew constructing the line, then their fireline will look a lot like a hiking trail. They will use chainsaws to cut away trees and brush. And then they will use hand tools to scrape away pine litter and grasses till they get down to dirt. And since “dirt don’t burn”, you have now successfully created a barrier between the burned area and the unburned area (or to use fire-speak, the “black and the green”)

Step 3: Cut off The Head, or “Hooking It”.  Eventually, the two squads will catch up to the fire and will be in a position to start pinching it. This is a major decision. Primarily because the danger to the firefighters is elevated. As they work on bringing the two lines together, the fire will now be below them, which can be very dangerous. Also, it is at this moment that the firefighters are exposed to the greatest amount of heat and smoke. But this is a necessary - and critical step. This is pretty standard initial attack strategy when the fire is relatively small (maybe a small lightning strike fire that's skunking around, or a fire that's moving at a moderate speed in duff or grass with minimal flame height). If the wind is gusty, or the fuel is such that the flames are big (more than a couple feet), then the crew might pass on hooking it, and look to tie it in another anchor point. A rock formation, a road, a scree field, a pond or a creek, a fire road, etc. 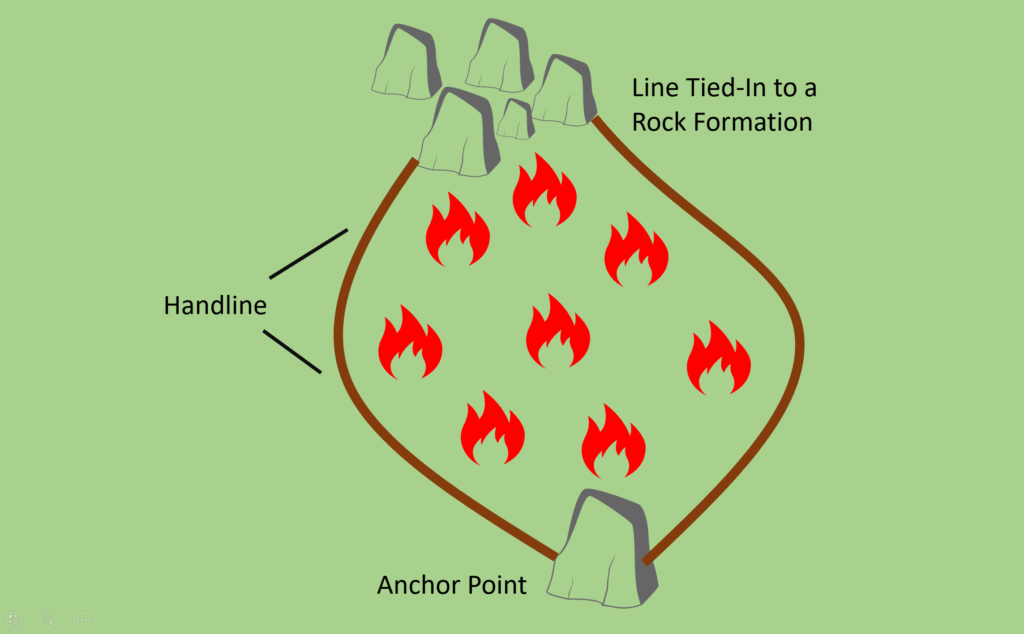 Once the fire has been ringed, the crew will then monitor their line, reinforcing areas as necessary. With nowhere left to go, the fire will begin to die down as it runs out of fuel to consume. Eventually the active flames will be replaced by a smoldering landscape. You might think at this point that the firefighter's job is done. But you’d be wrong! The fourth and final step is….

Step 4: The Mop Up. Now, the crew will start putting out the fire by digging up burning roots and stumps, chopping up burning logs, and cutting down hazard trees. After the fire is declared “contained”, mop-up begins. The first step is to reinforce the existing fireline, and to secure the area immediately adjacent to the line. An incident commander might order crews to mop-up “one chain (66 feet) in to the interior” off the line. And during the next operational period, they might extend the zone to two chains, and three chains the next. The point is to ensure that there is no active fire closest to the fireline that could potentially erupt and send embers across the containment lines, causing new spot fires. This phase is without a doubt the most tedious, and sometimes takes 2 or 3 times as long as the containment phase. Yet it needs to be done. It’s also where you can make a lot of money. On a small roadside fire, you might be asked to mop-up the entire fire, leaving no remaining hot spots. On larger fires, completely extinguishing the fire is impossible. What IS possible is to create a ring around the interior that is large enough to contain any flare-ups, and keep it in check till winter arrives. And Mother Nature finally puts the fire to bed for good.

As you can see the concept is relatively simple. Trap the fire in a box by denying it access to fuel. Allow it to burn itself out and then mop it up.

Regardless of how complex a fire is, fire managers will be thinking about fighting the fire by employing this type of mental model: "how can we box it in?" And if we can't box it in, can we divert it? And if we can't divert it, how do we protect what lays in its path? As you spend more time in fire, you'll learn more about the different strategies and tactics that can be employed. But regardless of size or complexity, it all comes down to boxing it in. Whether it's a campfire or a 100,000+ acre fire.