As someone who spent his entire, albeit brief, career on hand crews, it pains me to avoid making an “Engine Slug” joke in this section. However, because this site is intended for all audiences, I will refrain. I kid, I kid! Since the introduction of mechanized vehicles to fire suppression, I imagine there has existed a friendly rivalry between hand crews and engine crews. Each side will argue to the death that their role is the most critical link in the firefighting chain. So consider this just one more salvo in the ongoing war.

Sidestepping that argument for now, I will say that wildland fire engines and most importantly, their crews,  play an enormously important role on both initial attack and extended attack operations. During initial attack, a good engine crew will be able to move in unison with a hand crew, establishing a ‘wet line’ of foam or water. This knocks down the flames and allows for a saw team to come in and clear vegetation, and also allows scrape to follow-up and establish a control line down to mineral soil. While hand crews are more than capable of constructing line without water, having it allows the crew to go direct, and be more aggressive in their efforts.

On their own, Engine Crews are great at responding quickly to a blaze and knocking it down before it gets big. An engine crew with a couple hundred gallons of foam and water is often times the only thing that stands between a 1/4 acre grass fire and a 100+ acre inferno. Because of their quick response times and impact (manpower + water)  engines are leveraged heavily during initial attack (IA) operations.

But their value isn't limited to IA. During extended attack (EA) operations, engine crew members find themselves playing a number of different roles. If structures are present, they will be used for structure protection. Which means they remove fuel surrounding structures to create fire breaks. They might setup a series of sprinklers around a home to wet the structure and surrounding vegetation. If or when the fire does approach, they will defend the structures. They may also be assigned to help with aviation operations and fireline construction (though the latter happens rarely).

Another thing that I was surprised to learn when I first started, was that all engine crew members were SCBA certified, and they carried masks and tanks on their rigs. Part of their mandate is to provide vehicle fire support on roadways within the boundaries of the national forest or national park. If you think about it, it makes sense. If you hit another car on a backcountry highway, who would respond? If you’re around national forest land, there’s a good chance that a US Forest Service engine would be the first engine to respond. And they need to be prepared to deal with vehicle fires and medical traumas.

Engine Captain (Foreman)  - The Captain commands the engine. If the engine is first to arrive on scene, the Captain is the nominal Incident Commander until he is relieved by a more senior IC. During initial attack operations, the Captain will determine the fire suppression strategy and work with his crew to execute it. He is the most senior firefighter on the crew, and in charge of training the crew while not on fire assignments.

Fire Engine Operator (FEO) - This person serves as an assistant to the Captain. They are  principally tasked with overseeing the pumping operations during an initial attack operation. As a skilled and veteran member of the engine crew, this position provides guidance to the crew members around general firefighting tasks like where to establish hose lays, line construction, etc.

Engine Crew Member (2-3 people) - This the entry-level point for serving on a wildland fire engine. No previous fire experience is required. All you need is a good attitude, physical stamina, and a willingness to learn. On a fire, a crew member could be responsible for doing anything from manning radios, cutting brush with a chainsaw, prepping line with a pulaski, or operating a hose. One of the hardest things an engine crew member will have to do is to build a progressive hoselay. When you're fighting fire in the woods, you can't always keep the right beside the fireline. So as the fire races away (usually up hill), crew members will travel back and forth, building the hoselay, one section of hose at a time. It can be downright exhausting. You're humping up and down the hill, carrying fresh hose. Then racing back down to grab more. And the kicker is that each successive trip is longer than the one before! Welcome to life on the engine! 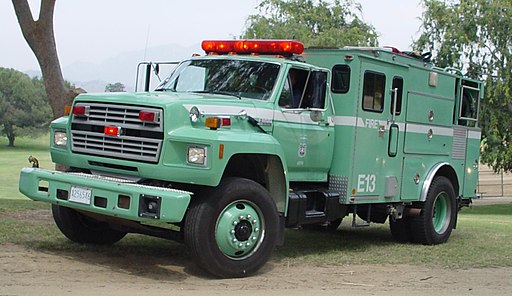 The most common wildland fire engine you will come across is the Type 3 (pictured above). These rigs can typically accommodate up to five crew members, and carry a minimum of 500 gallons of water

If these are so common, why aren’t they Type 1s? Good question. You know those monstrous red and white fire engines you see driving through your city? Those are Type 1 & 2 Engines. What are some differences? The main difference is that wildland fire engines can “Pump and Roll”. Type 1 and 2 structural engines almost always must be parked in order to commence pumping operations. In a structural fire situation, this is fine. However, wildland fires are much more fluid and dynamic events, and engines - to be effective - must be mobile. All wildland engines are capable of having a firefighter operate a charged line while the vehicle is advancing. Anyone who has ever deployed a progressive hose lay from a stationary engine can appreciate how awesome this capability is.

Unless you're an Engine Captain with 20+ years of experience, you'll probably struggle to tell the difference between a Type 3 and a Type 4 engine. That's because their chasis, cabins, and overall silhouette are pretty darn similar. What's the difference? Water tank size,  and personnel required, Most Type 3's will have a 500 gallon water tank. A type 4 is capable of carrying 750 gallons.  250 more gallons is a pretty big deal, especially in the woods, where fire hydrants are pretty scarce...Nothing comes without sacrifice, though, and to make room for that extra water, Type 4's carry a smaller pump. Whereas a Type 3 is capable of pumping 150 gallons a minute at 250 psi, a Type 4 can only pump 50 gallons a minute at 100 psi. And a Type 4 engine only requires 2+ personnel (vs a Type 3 engine which requires 3+).

Of all the engine types in current use, the Type 5 engine is probably the rarest. The one above, by Blanchat Manufacturing, is built on a Ford F-550 chasis, and comes equipped with a 500 gallon tank. Notice the space between the cabin and the tank? You can put an engine crew member there, with a nozzle in hand, and they can fight fire while on the move. (See image below). The Type 5 engine is a smaller, more agile rig, so it can get into areas that a Type 3 or 4 can't, but it still carries a respectable payload of water. Type 5 engines are most commonly used in areas where their speed and size can be maximized, and thus are more prevalent in the midwest US. Or other areas where fine fuel fires are common.

The Type 6 Engine is the Rocky Balboa of wildland fire engines. They're easy to underestimate because of their smaller size. They carry a minimum-sized tank of 150 gallons, and can pump 50 gallons a minute at 100 psi. However, it is pretty common to see Type 6 rigs fitted with 500 gallon tanks. Which means these engines can arrive on the scene with the same amount of water as a Type 3, which is darn near double the size of a Type 6. Since I was always stationed in California, I always called these engines "Patrol", and they were usually staffed by a single resource. Outside of California, they are more widely used, and usually manned by a crew of three. If you notice the first image above, the Kern County Patrol rig doesn't have an extended cab, whereas the rig below, currently in use by the Hygiene Fire Department in Colorado, has an extended cab to seat additional crew members.

Often times referred to as a "Prevention" rig. These are the smallest engines on the line, and carry the least amount of water (50 gallon minimum). The pumps must be capable of delivering 10 gallons a minute at 100 psi. The prevention rig is designed to keep an escaped camp fire in check, help with mop up operations, and provide support during prescription burning or firing operations. Usually, these are manned by a single firefighter.

Water Handling Equipment Guide > If you want to nerd out on gear, this guide covers everything from different approaches to preparing hosepacks to technical specs on all the different engines in use. It's fascinating. Comprehensive. And probably a little dry for most readers. But if you're fascinated by wildland fire engines, you should dive in.

Want to learn more about CALFire's Engines? They do a good job of describing their entire fleet here.