What Does a Fire Effects Crew Actually Do?

If you want to understand the importance that a Fire Effects Crew plays in today's wildland fire management model, consider these questions:

"Hey, I know everyone's talking about doing more prescribed burning, but, um, does anyone know if the last ones we did have made any difference?"

"Remember that fire last year? Holy Smokes - that was nuts. Any idea what the impact was to the land it burned? Are the plants rebounding?"

"Five years ago, we went hog wild and did some serious mechanical thinning on the west side of the forest. How does that compare to the east side where we didn't do any treatments. We've had fire in both areas. Is fire burning differently in these areas? Should we request more funding to keep doing these thinning projects?"

Fire Effects Crew are responsible for answering those questions. These are critical questions because there is only so much budget to go around, and a limited number of people to do the work, and a limited window of time to do it. Today's fire managers need as much data as they can to make the smartest investments with their dollars and labor.

Fire Effects Crews give them the data they need to make informed decisions.

How do they do it? Well, they're basically scientists who have traded in their lab coats for yellow nomex shirts. Throughout the season, they're responsible for setting up and managing fuel and vegetation plots so as to monitor prescribed fires, wild fires, as well as the impact on thinning projects. They're masters of GPS and actually know how to measure how much moisture is in soil and surrounding vegetation (among other things). While they might balk at being called scientists, they're probably closer to technicians, but there's no denying that they bring a scientist's curiosity and love for testing hypotheses and collecting evidence to the fireline.

Well, their primary mission is as an observer. And a big part of their job occurs before and after, rather than during, a wildfire or a prescribed fire. However, when the National Preparedness gets up to Level 4 or 5, and able bodies are a scarce commodity, it's not uncommon for crew members to detail on to other crews to assist with suppression efforts. Depending on a crew members level of fire experience, they could detail on to a number of different crews. For example, the Teton Interagency Fire Effects crew shares its station with a helitack crew, a fuels crew, a Type 2 IA crew, and a handful of engines. If anyone of those resources needs an extra person in order to qualify for a resource order, a member of the Fire Effects Crew could detail over (assuming they have the quals).

Because of this, Fire Effects Crew Members need to keep in excellent physical shape.

The average Fire Effects Crew is composed of 5 crew members and will often times be supervised by a park or forest ecologist. 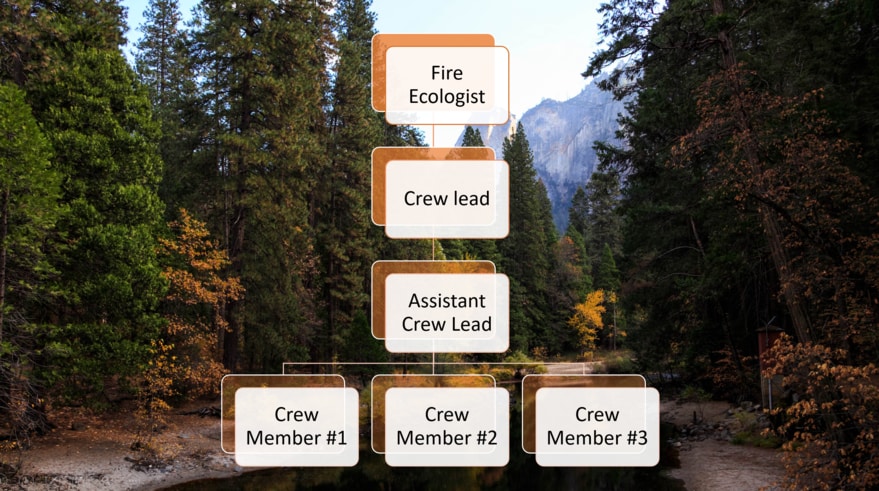 This Sounds Awesome. I'm in! What Experience is Required?

To be clear, a job on a fire effects crew is not an entry-level gig. Most crews hire their crew members at the GS-5 level. And while previous wildland fire experience is not required, it is considered "highly desirable".  An academic background in forestry or biology would serve someone well, as would previous working on a fuels crew or a hand crew. Like most seasonal roles involved with fire, the season runs from when it starts to warm up to when the snow comes. In places like Wyoming, that means their season runs from May to Later October on average.

Where are the Jobs?