The US Fish and Wildlife Service is not the first federal agency that comes to mind when one thinks about a career in fire. Which is unfortunate. While the organization known as Fish and Wildlife service can traced back to 1940, it's lineage goes much further back, starting in 1871 with the creation of the US Commission on Fish and Fisheries. Their operating budget back then? $5,000! Since then the organization has grown dramatically and oversees land in all 50 states as well as all US territories.

The agency describes its mission as follows:

The U.S. Fish and Wildlife Service is the principal Federal agency responsible for conserving, protecting and enhancing fish, wildlife and plants and their habitats for the continuing benefit of the American people. Fire is essential to managing the majority of the Service's 150 million acres, which includes 560 national wildlife refuges, 38 wetland management areas, a network of national fish hatcheries and numerous other sites in the United States and its territories.

If you're considering (or currently active in) a wildland fire career, then you appreciate the importance of managing not just our lands, but the wildlife that depends on those lands. Working with the FWS provides an opportunity to battle fire and protect habitat for endangered species and migratory birds. A win-win scenario for sure!

See how the Fish and Wildlife Service compares to other federal agencies below. 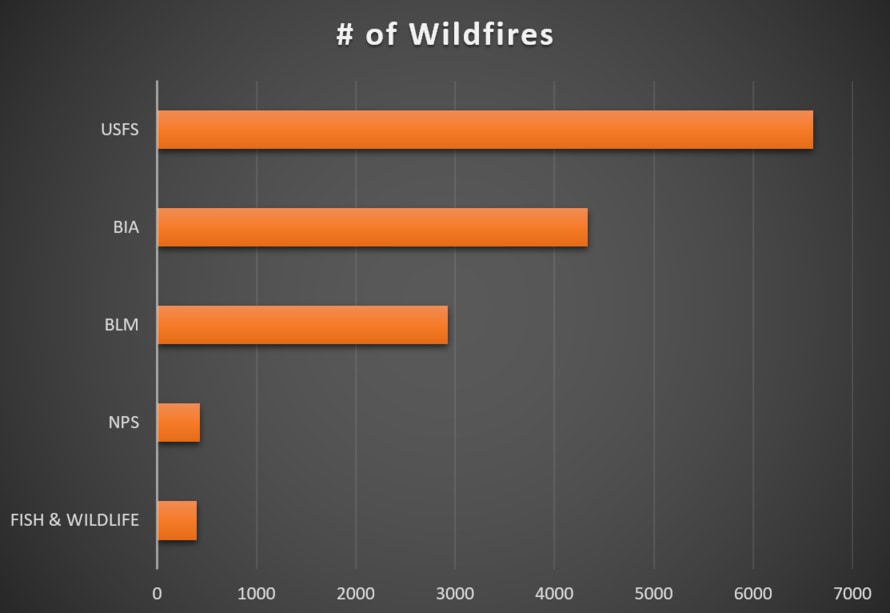 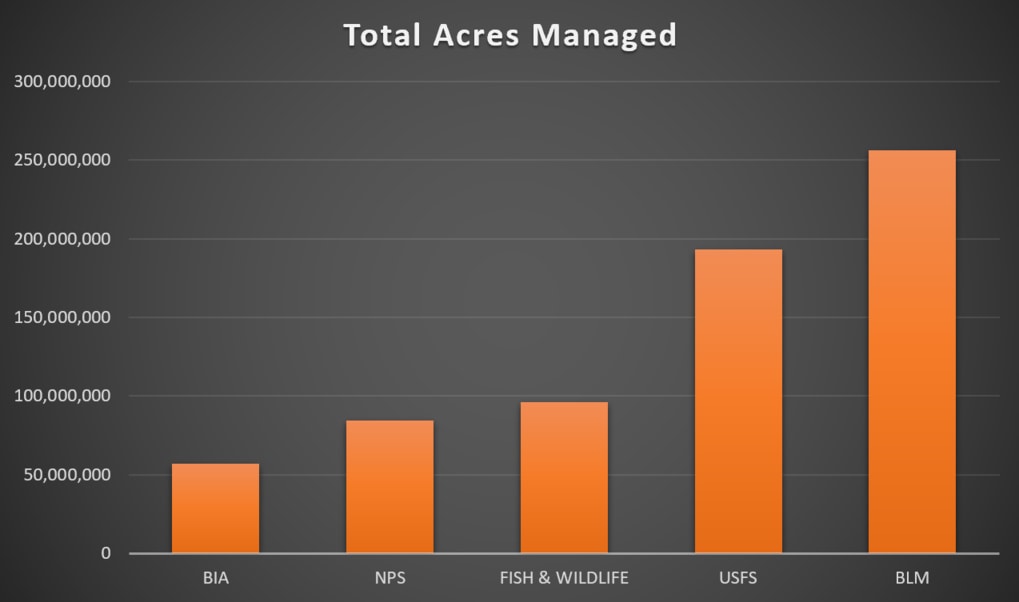 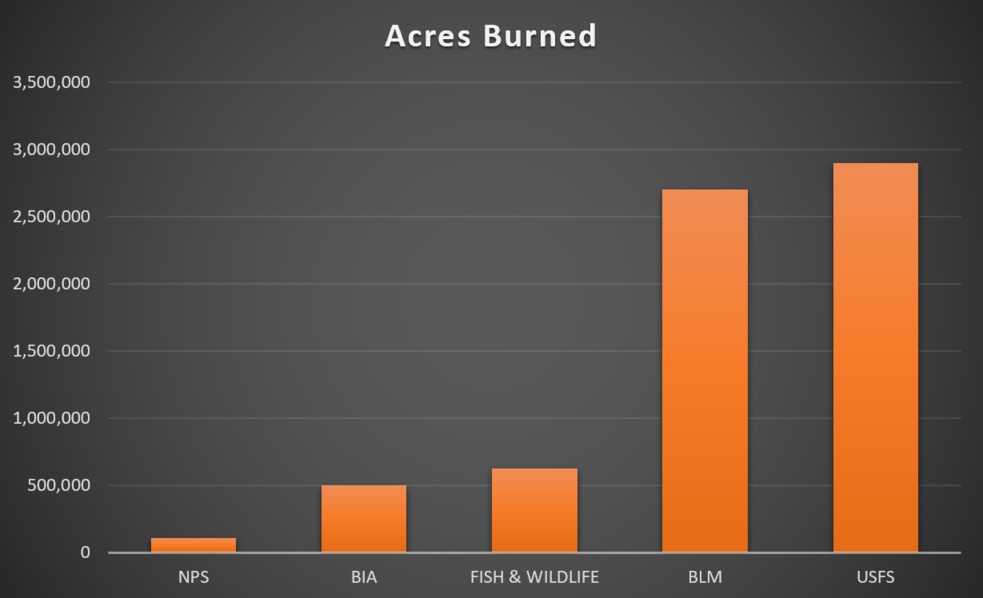 What stands out when you look at those charts? Probably the first thing that you noticed was that compared to the other federal agencies, they don't see anywhere near the volume of fire starts on their land.

However, that doesn't mean the skies are smoke-free all year. The FWS is one of the most active prescribed burners of any federal agency. They put a lot of fire on the ground, particularly in the Southeastern US. So while you might see less suppression activity, the ability to quickly dial-up experience in prescription burning is a major benefit of working with the FWS. Also worth noting is that the FWS manages more individual units than any other agency. And many of those units are in places where the Forest Service and BLM have a much smaller presence. Think about the Gulf Coast, Florida, and the Upper Midwest (particularly Minnesota & Wisconsin) for example. For folks who are from those areas, and might not be able to travel out west to pursue a job on a western district, the FWS could be a great option to consider.

According to the FWS, in any given year, there are approximately 500 full-time employees dedicated to wildland fire management, and 200 temporary seasonal employees. An additional 2,000 other service employees are red-carded and available to respond to fires on an "As Needed" basis.

Like the Forest Service, the Fish and Wildlife Service organizes itself into regions. 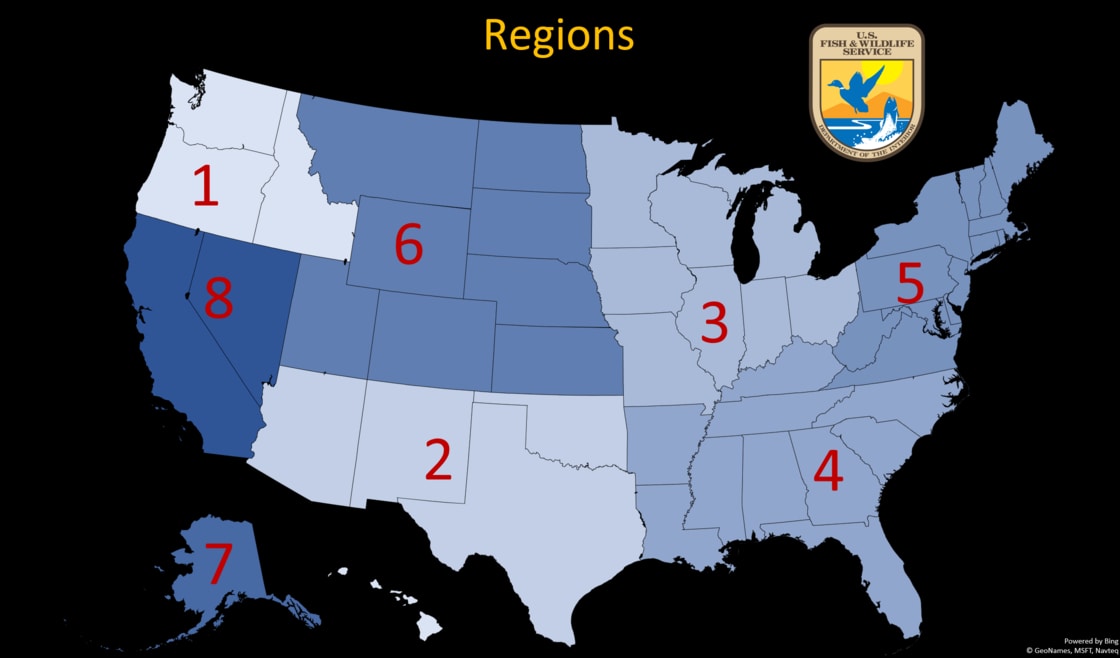 The Fish and Wildlife Service is a bit different than the other agencies. Almost all entry-level positions will be on engine crews. They do not have any of the following:

With approximately 75 engines in the FWS's fleet, this presents the best area for an entry-level firefighter to break in. Now, it's a bit tough to determine precisely how many people are employed year over year on these engines because, depending on the type of engine, staffing levels might vary. For instance, a Type 3 Engine (the largest wildland fire engine) might have 5-7 firefighters assigned to it, while a smaller rig, like a Type 6 engine, might only have 4 or 5 firefighters assigned to it. Also included in this might be patrol rigs or prevention rigs, which might only be staffed by 1 or 2 firefighters. That being said, 300 is our best estimation based on the information available to us. Assuming that each engine could hire 1 - 2 rookies per year, you're looking at somewhere between 75 and 150 entry-level opportunities.

By the numbers alone, your best chance to get on with the FWS for the fire season will be on an engine crew. There are simply more spots available than anywhere else.

Of the 48 active wildland fire modules, only 1 of those modules is a Fish and Wildlife Service crew. The Balcones WFM is stationed on the Balcones Canyonlands National Wildlife Refuge in Texas. Balcones WFM can have between 7-10 crew members. Depending on the crew, between 4-7 of those roles could be designated for entry-level crew member. And while there is not a specific requirement that crew members have previous fire experience, per NWCG guidelines on WFMs, it would be fair to assume that the crew would limit their hiring of rookies to 1 or 2 per per season.

Pro tip: If you're interviewing with the Fish & Wildlire Service, skim their annual reports. You might learn a thing or two!