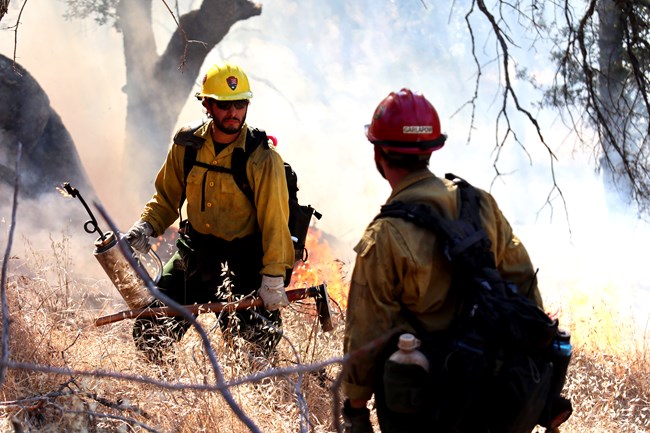 Wildland Fire Modules represent a major paradigm shift in how the fire community views the role of fire in our wildlands. Ever since the famous Big Burn of 1910 torched Idaho, Montana, and eastern Washington, agencies like the US Forest Service have gone to war every summer with fire. Fire was something to be controlled at all costs. Hence the rise of fire suppression forces like smokejumpers and hotshot crews. The primary purpose of these forces was initial attack. It was their mission to “take the fight to the enemy” even if that meant parachuting deep into a remote wilderness to contain a lightning-started fire. There was no good fire. And for decades that was the prevailing attitude.

Then, in 1988, Yellowstone National Park damn near burns down. By the time the snows came in November, nearly 800,000 acres were impacted. For purposes of comparison, the entire state of Rhode Island is about 988,160 acres. While some have said the media sensationalized the coverage, the fact still remains that almost a state-sized area of forest in one of America’s most beloved national parks was charred, or otherwise impacted.

This event sparked (pun intended) some serious soul-searching and reflecting within the fire community. People began to question the prevailing wisdom, and asked questions like “Have decades of aggressive fire suppression harmed our forests?” “What is the natural role of fire in our environment?”

Officials with the National Forests and National Parks suspended, reviewed, and updated their fire management policies. By 1992, Yellowstone National Park, along with many others, set in place a set of rules by which natural fires would be permitted to burn. https://www.pbs.org/edens/yellowstone/shaped.html

But they wouldn’t be allowed to burn without supervision. So the question then became, what resources do we have available to oversee these fires? Who can monitor them, track them, and keep them in check, and if they become threatening, would be capable of going hard against them on initial attack?

When they looked around, they didn’t see any resources like that. So in 1995, the National Park Service introduced Fire Use Modules (FUM) in 5 parks.

The FUMs were comprised of 7-10 firefighters who were assigned the task of managing the use of fire within the park.

The introduction of these nine crews signaled a new era in our approach to managing wildfire. Rather than focusing strictly on fire suppression, fire use modules were created to help with the reintroduction, and proper management of fire, on our public lands. After almost a hundred years of viewing fire as an enemy to be battled and destroyed, the attitude had shifted. Fire's place as a natural ecological process would be restored. And wildland fire modules would be at the vanguard of that effort. These crews would be nimble, versatile, well-equipped, and able to play a variety of different roles.

Over the last twenty years, the number of Wildland Fire Modules has grown dramatically. There are now almost 50 wildland fire modules operating throughout the US. While the NPS pioneered their use, other agencies like the Bureau of Land Management (BLM), Bureau of Indian Affairs (BIA), Fish and Wildlife Service (FWS), the Forest Service (FS), and even the Nature Conservancy(!) have all started their own wildland fire modules.

"The primary mission of a WFM is to provide an innovative, safe, highly mobile, logistically
independent, and versatile fire module with a primary commitment to maintain fire’s role as a
natural ecological process for wildland fire management and incident operations." (Interagency Standards for Wildland Fire Modules)

The Saguaro Wildland Fire Module described what they do in the following way on their Facebook page:

"The module specializes in independently managing remote wildfires, but is typically also involved in local IA [initial attack], prescribed fire, as well as large fire management or suppression throughout the Western U.S."

The Buffalo River Wildland Fire Module describes their capabilities as:

[Buffalo River] is capable of providing burn bosses and firing bosses for prescribed fires, and can independently oversee the planning and implementation of burns. The module can independently operate in the field during wildfires, and can provide initial attack, fire
monitoring, GIS and mapping support, structure protection, risk assessments, and hazard fuels reduction. The module can also provide overhead at the task force level and beyond.

Additionally, when the National Preparedness Level rises to a Level 4 or 5, Wildland Fire Modules go on the boards as a fire suppression resource.

What Types of Assignments Do Wildland Fire Modules Get?

Honestly, for sheer diversity of assignments, you can't beat a Wildland Fire Module.

Seasonal / Non-Supervisory Crew Members should be:

Even though a crew member on a WFM might spend part of an assignment snapping photos to document a fire's impact, or banging on a keyboard to enter some data, these guys and gals aren't soft pencil-pushing, desk-jockey types. They can cut hotline with the best of them too. And they do when the situation calls for it. Because of that, and because of the overall arduous nature of their jobs, they're expected to arrive at the station at the start of the season in peak physical shape. And during the season, while not engaged on a fire, they're expected to dedicate 1 hour per shift to physical fitness. While not required, it is recommended, per interagency standards, that all WFM personnel be able to meet the following physical standards:

Is the pack test required?

Yes, crew members must complete the work capacity test at the arduous level (3 mile walk with a 45lb pack in 45 minutes or less).

What kind of gear do WFM's use?

Here's a breakdown of the gear that the Southern Rockies Wildland Fire Module took into the field a few years ago:

Backcountry Camping Equipment. Wildland Fire Modules need to be self-sufficient. So they travel with camping gear.

As you can see, WFMs roll around with a lot of gear. In the event of a Zombie-Apocalypse, your first move should be to find a WFM and rally up with them. Food, water, chainsaws and drip torches? If you can’t link up with a SEAL team, these guys are your next best bet.

So, what type of vehicles do WFMs use to transport all this gear? Well, there are a few different configurations. Each crew will have it’s own unique needs (and funding), but the NWCG standards require, at minimum, two vehicles per WFM. This gives a module the ability to divide into two units and perform separate assignments. Here are a few of the different setups we’ve seen:

1 six-pack truck and a type 6 engine

2 Type 6 Engines and a fleet of crew cab trucks

Bottomline, a WFM will have a minimum of two vehicles, but it is up to the module and their hosting agency to make the decision about what vehicles are best. Also, depending on the vehicle configurations, some WFM's travel with trailers.

Who are the employers?

Total # of Positions Available: Assuming all crews are fully-staffed, 470 people will be employed on wildland fire modules. If crews were to be staffed minimally, 329 people would be employed on modules.

What's the Difference between a Type 1 and Type 2 Wildland Fire Module?